After our review of Inteligen, we have to say there is some room for improvement. We like some of the ingredients in here, but things like the proprietary blends, St. John’s Wort and DMAE (potentially risky choices) could do more harm than good.

It’s an old timer on the nootropic market, and may need and update for both their brand and to help your brain.

To see what we think is the best option at the moment, click here to which nootropic I am currently using.

This is our review of InteliGen. It’s a natural nootropic on the market which has claims to promote:

But how well will it work for you?

In this review, we study the InteliGen nootropic to see how effective it really is.

We’ll be looking at the ingredients, side effects and more with InteliGen to get a better picture of it.

The first that we noticed about InteliGen is that the ingredients are part of a proprietary blend.

A proprietary blend is when a nootropic manufacturer chooses to hide the individual dosages of the ingredients in their supplement and instead groups them together under larger dosages.

This means you don’t know how much of each ingredient you’re getting or how effective it will be overall.

It is not a good look, and it happens more often than you think. Not only that, some of the ingredients InteliGen have links to causing some problems.

We take a full look below:

This isn’t a great start to InteliGen. Ginkgo Biloba does have some studies which show it to be a promising option – however, there are also some that say the opposite.

Gingko has been seen in some cases to help raise focus and cognition. However, other studies show that subjects supplementing Ginkgo Biloba experienced little to no effect from the nootropic.

At the moment, many researchers are believing the full extent of Ginkgo may just be placebo effect.

This isn’t an impressive option either in InteliGen. L-Glutamine is an amino acid which has claims to promote cognition – but the actual benefits are minimal.

It’s mainly due to the fact that your body gets the optimal amount of glutamine from most of the food that you eat. Most dairy products and other types of food contain large amounts of L-Glutamine.

The only thing supplemental L-Glutamine has been seen to do is help reduce sugar cravings in those deficient in L-Glutamine. You’re not going to notice much of a difference.

This is a much better option in InteliGen. Bacopa Monnieri is a herb which can help reduce anxiety and promote memory formations.

Together, these are some formidable benefits. Bacopa can help you stay calmer and more collected while using InteliGen which can support a better mindset when you’re in a high pressure working environment.

It’s great to see in this nootropic.

This is a good ingredient in InteliGen, but the proprietary blend in this nootropic makes it very hard to tell how effective L-Carnitine will actually be in here.

L-Carnitine is an amino acid which has been seen in numerous studies to help energy, metabolism and even focus. This makes it good for training in the gym, cutting weight and staying sharp.

However, to reap these benefits, you need a lot of it. Studies show that for the best results you need between 500 – 2500mg of L-Carnitine in a serving.

As this is a proprietary blend, it’s very unclear whether you’ll be getting that full amount in InteliGen.

This is not a good choice in InteliGen. St. John’s Wort is a nutrient which has claims to promote mood and reduce symptoms of depression.

It’s a very popular herbal aid for depression, and does work to an extent. However, it does have links to causing various side effects – despite bringing these benefits.

We don’t think it’s the safest option for you to use. Later in our InteliGen reviews, we’ll look closer at the side effects associated with this nutrient.

Not a good option either in InteliGen. DMAE is a nutrient which is commonly used in beauty creams. It’s typically applied to the skin and thought to help reduce the appearence of wrinkles.

However, more recently it has been started to be used in the nootropics market as an aid to help reduce cognitive decline.

Unfortunately, it isn’t as effective here. There are no human studies out there to show that it works, and there are rat studies which show it to have dangerous side effects.

More on that it in our side effects section later.

The final ingredient in InteliGen, and it’s not bad. Vinpocetine comes from the Periwinkle plant and it helps to some degree with memory formations.

Not only that, Vinpocetine has been seen in some cases to help with blood flow to the brain too. This can help your brain get more nutrients, blood, oxygen, glucose and essentially whatever it needs at a faster, more effective rate.

There are some good options in InteliGen, but we have to take issue with the proprietary blend.

You don’t know how much of each ingredient you’re getting, so it’s hard to know how effective it really is.

We also see problems with St. John’s Wort and DMAE as they have both been linked to causing side effects (more about that later).

Ingredients that we think could be added to improve InteliGen include:

All of these would be great additions.

It’s a shame they’re not in InteliGen.

St. John’s Wort and DMAE have both been seen to cause side effects in research and could potentially cause you problems in InteliGen.

For example, St. John’s Wort has links to causing:

And more, there’s a lot of issues with it, and not something that we recommend using.

Next up, DMAE. This has been seen to cause birth defects in rat studies. If this is happening in rats, there’s a chance it may scale up to affect humans. This isn’t always the case but it hasn’t been proven to not be as of yet.

If you’re trying for a baby, we suggest avoiding InteliGen.

As you can see there are some good ingredients with InteliGen, but there are some problems with it that we are struggling to look past in this review.

The proprietary blend in InteliGen is an issue. You don’t know how much of each ingredient you’re getting, so how can you know how truly effective it really is?

Not only that, some of the ingredients like the St. John’s Wort and DMAE have links to causing side effects.

It’s not the safest option out there. 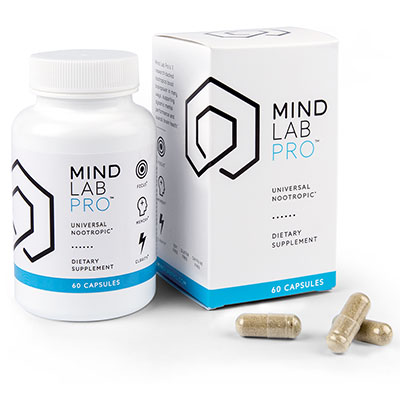 Mind Lab Pro is the best nootropic I've tried and reviewed. For the value, effectiveness and overall cleanliness of this supplement, Mind Lab Pro blew us away and is our top rated nootropic.

Containing 11 study-backed, well researched ingredients that work in clear, study-backed dosages, MLP is an impressive formula that delivers fantastic results in a way we've not seen before.

It's allergen-free, vegan, non-gmo and much more. If you want something that works, safe and won't break the bank, you should read our full review.

I've tried it myself and 100% vouch for it. If you want to learn more about my experience, click below.